The important dates of the microlight aircraft Base La Ramière

- The idea germinates in my head to create a new base. And with the contribution of Raynaud
Christian (master) owner, yawner of the ground, the ULM Base La Ramière was born!

- The bubble: the devices are stored in a bubble, round shed in canvas. The opening is done by the front. The canvas is lifted by a pulley that opens half of the half circle. 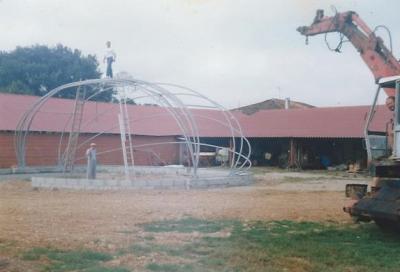 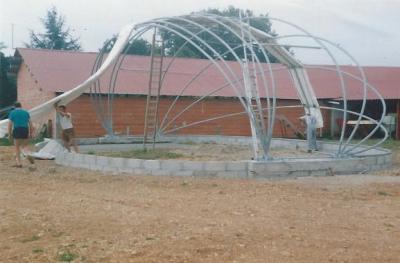 - A fatal accident (still not understood) carries our friends BOUGLE Alain, breaks our enthusiasm, shakes our determination and compromises the very existence of the club.

- Beginning of a new dynamic with "the clan of the scrap metal" (LAVIT, TABA .., BIRBES ... DOAT). At that time we were convinced (wrongly of course) that to satisfy our passions, we had to create a festive atmosphere including the women pilots to ensure a certain legitimacy and by the same "buy" our tranquility.

The evenings followed the festivities, succeeding the aperitifs, relayed by meals ...

- "Mr. AXISA, I think my husband drinks at your club"

- "My husband was at the club yesterday?"

No name, of course, the solidarity between the pilot is not wind!

Whoever believes that he can afford to smile, does so discreetly, otherwise he will be entitled to derogatory reflections.

Francis is always with us: who proves that ... nothing finally.

- A young old man, Michel BAIXAS (10.01.2003) does us the honor of flying with us. At the same time, it teaches us the new values ​​of aviation (navigation, radio, restaurant aerodrome, bistro aerodrome, aerodromes anyway ...)

The green is in the fruit, it is the beginning of the end of the commuters ... they who want a culprit, we found. Be aware that if someone touches the hair (it is difficult to talk about several hair!) Michel, he will deal with my wrath!

- another Michel ... ALBISTUR this one, we arrive (23 .08.2003) from Languedoc, sewn with gold and embroidered with silver. His wealth dilapidated, he manages to get his patent ... ruined, but happy! (Holds, I can not find his coward, it's a secret between him and me ... do not insist !!!)

Michel is the "Donquichotte", earlier or perhaps the "Sancho PANSA" of the commuter, the "fabulous-pendulons" the most famous of the county of La Ramière (despite the appearances, or what you can imagine in your heads of reptilian, I have the greatest respect for the people who defend their convictions (the one who will dare to speak ill of him will be entitled to my wrath !!!).

Oh yes ! Anyway, a little man, SARKOSY (a pot to Michel, I think?), Makes us a visit with some helicopters (photo)

Simpatoche the Nico !!! Not really, he did not even greet us, as a bonus he made us holes in the parking lot with his armored box (more than 3 t).

Still, we are the only ULM base "Presidential". It's not nothing that !!

Yes !! Also !! in 2006 or 7 our friend GARDIOLA Patrice, well over sixty brings us back a great autogyro. In addition to the courage (notorious) to learn this discipline, it is he and only he, the forerunner of this class of apparatus, bravo patrice (the one who will speak ill of my friend "black foot" will deal with the whole family ... black feet).

2013: It's almost not history since yesterday (hardly more than tomorrow)

In short, we arrive a small blond (Toulouse) of course, the kind not - tibular, but almost with a name to sleep outside: Strifelloouuzz! a French name anyway: Philippe.

He begins to explain to us what to do and not to do ... No but !!!!! Do not bother this guy, still a Toulouse who wants to know everything ... and pay anything!

There, children is a turning point for the club. Do not let it threaten us with the Internet, Gopro, pixels, SMS, MMS, Bits, Bytes, Wiii, Bluetooth, email, Cloud, Twits, Ipad, Ipod, Itunes ..., Geek what! Who's this guy to provoke us like that ???

The one where the one (that, I would be surprised) who will say bad